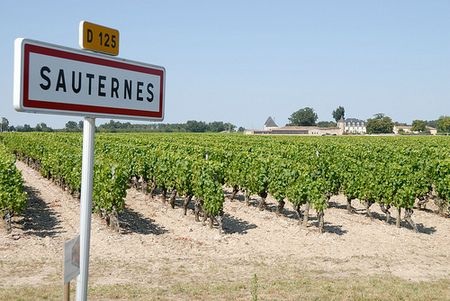 A trip from our stop in Castet-en-Dorthe to the world famous Sauternes AOC, the wine of Sauternes, praised as early as the XII century by Richard the Lionheart, was regarded by gourmets of bygone days as the finest of great white wines. Thanks to the 1855 Bordeaux Classification the quality & renown of Sauternes wines was recognized.

The Sauternes region lies 45 km from Bordeaux on the left bank of the mighty Garonne river, the Ciron, tributary of the Garonne provides the region with a micro climate of autumnal morning mists which dissipate rapidly which let’s the sun through to ripen the grapes perfectly.

The Sauternes grapes are however not picked when they become ripe, the grapes must reach full concentration by the on set of Botrytis Cinerea, also known as the ” noble rot “, as the grapes look rotten but are still very juicy, the pickers will have to go to each vine upto five times, each only picking the grapes with noble rot, consequently the harvest has a low yield with only 1 to 3 glasses per vine.

Our first stop was in the centre of Sauternes village at the Maison du Sauternes, since 1979 this association has gathered all wines from Sauternes & represent the members in promoting there wines. 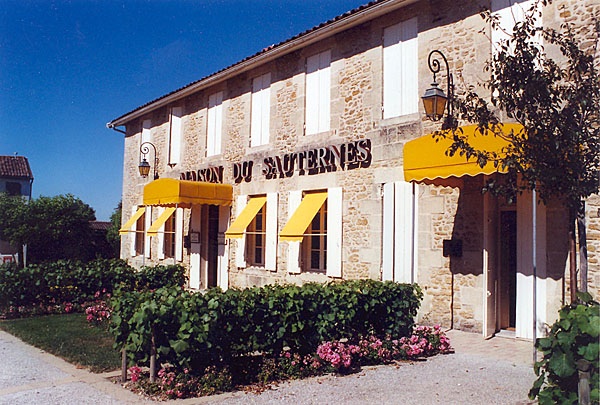 Here are you have a tasting starting with a standard base wine & from here depending on wether you want more acidity, more or less sweetness or more rounded & full bodied the master sommelier will guide through two more tastings to find your preferred wine, believe me the difference is amazing.

i finished with a Chateau Raymond-Lafon 2005, a very round & smooth wine, which is not over sweet.

Next we drove north out of the village to Chateau de Rayne Vigneau, created in 16th century & known as Vigneau de Bommes after the village the Chateau sits above. The 1855 Bordeaux Classification recognised Vigneau as one of the best in Sauternes.

The vines are in a single block 84 hectares, of which 5 hectares of Sauvignon Blanc are put to one side to produce a dry white Sauvignon Blanc called Le Sec de Rayne Vigneau, the remainder of the grapes are harvested to make Sauternes. The Sauternes here is made up of 74% Semillon, 24% Sauvignon Blanc & 2% Muscadelle.

After picking pressing & blending, the blend is then aged in oak barrels.

After the complete tour you have a wine tasting where you start with the dry white Le Sec which is a very fresh wine with hints of grapefruit & feels velvety on the palate.

Then we tried the Madame de Rayne, the second wine of the vineyard, on the nose this has hints of marzipan & on the palate marmalade & apricot.

Then we moved on to the 1855 Classification wine Premier Grand Cru Chateau de Rayne Vigneau, which is much more complex than the first to wines & has a much rounder & smoother feeling on the palate.

After the tasting I bought a 2005 bottle which was a good year in Sauternes.

Sauternes are all to often called dessert wines which is not correct, if you pair up these very sweet wines one does not bring out the flavour of the other as it is sweet on sweet.

Sauternes work very well as an aperitif as they awaken the taste buds before you eat.

One of the perfect food parings for Sauternes is Foie Gras as the sweet & rich work very well together, it also pairs well with lobster, crayfish, fish served with white sauces such as mousseline, roast duck, pheasant, partridge & guineafowl, blue cheese especially Roquefort & desserts that are not overly sweet like a bitter chocolate tart.